A football story in a hurling stronghold

Back in 2012, there was a 50th anniversary get-together for the Tullogher side that last won the Kilkenny senior football championship.

Philly Murphy was one of the men present as homage was paid to the club’s most recent triumph at the top level in the big-ball code — a day when they beat St Martin’s of Muckalee in 1962.

“He was a teak-tough full-back,” says his grandson Wally Walsh, a current senior hurling star with Kilkenny. “They met up there in 2012, celebrating 50 years since they won it. The club won lots of senior titles (eight), but they were all before my time. Football probably hasn’t been maintained to the same level in the time since because, like most places in Kilkenny, hurling is number one.

“Still, a lot of lads from our area — we’re near New Ross on the border with Wexford — went to school in Good Counsel and would have played football there.”

Victories for Kilkenny football clubs have been few and far between, with St Martin’s getting a win over St Andrew’s of Carlow in the Leinster IFC of 2011, before being narrowly overcome by Bryan Cullen’s Skerries Harps.

Tullogher-Rosbercon, as the club is now known, won the Kilkenny intermediate title on July 29, comprehensively beating Erin’s Own of Castlecomer by 2-10 to 0-7. They had to wait 90 days to get back out onto a football field, and in truth were seen as big outsiders against Wexford side Naomh Eanna – a side containing hurling star Conor McDonald.

Still, Walsh’s crew remained in top shape as they made it to the intermediate hurling semi-final against Graigue-Ballycallan on October 13th and were primed for their recent outing. They went seven points to nil ahead of the Wexford men at the start of the game, thanks in part to a strong wind, and were delighted to see a late goal disallowed as they just held on.

It turned out to be an unusual day at O’Kennedy Park for a couple of brothers linked to the club. Jason Shiely played centre-forward for the Kilkenny outfit and scored 0-3, while his big brother Eddie then played at wing-back for Wexford side Horeswood, who beat Mullinavat. Both are sons of Cork natives Liam and Eileen Shiely, who originated from the Tadhg MacCarthaigh club.

“In 2015, we played the final on the 23rd of December, and I was delighted because we weren’t going in for Kilkenny hurling training at the time, so I could play,” says Walsh.

“I don’t think I had played much with the juniors because I had been with Kilkenny in the years before that. This year, we got to the intermediate county semi-final in the hurling, so we had maintained our fitness, so we didn’t need to do a whole lot more. We have lads who can play football and, once they have some sort of fitness, they won’t be too bad.” 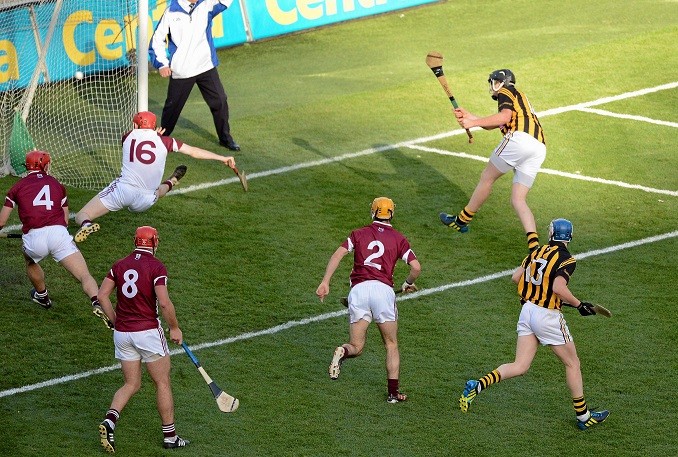 Those lads include Pat Hartley (who was on the Kilkenny senior hurling panel in 2010), Donnacha O’Connor, Declan Grennan and Cian O’Donoghue, who have all played for the county over the years. Had things panned out another way, they would have a man who has been signed up by Southampton FC, Thomas O’Connor, who scored 2-6 for Good Counsel when they beat Kerry’s St Brendan’s in the 2015 All-Ireland Post Primary Schools Paul McGirr Cup title.

“That’s Donncha’s younger brother. He was an excellent footballer and he won hurling and football All-Irelands at Under-16 with Good Counsel. I think he got player of the match in the football final, and they were against David Clifford’s team. Thomas was the main man.”

Walsh was also a rugby player with New Ross in his day, and current Ireland international Tadhg Furlong said earlier this year that the Cats star was a “hell of a player”. The big Tullogher-Rosbercon man would go on to be man of the match in the 2012 All-Ireland final replay, scoring 1-3 against Galway on what was his senior inter-county debut. It made him the first man from the club to win a Celtic Cross with Kilkenny senior hurlers.

A true all-rounder, Walsh had also shown his talents for Good Counsel when playing in the Leinster senior colleges football championship and keeping tabs with the dominant player of the era, Laois’ Donie Kingston. Hurling will always remain number one in the club but there has been a strong buy-in with the footballers in recent times.

“We played Naomh Eanna in New Ross, which is just there on the border, and a big enough crowd came down to supports us,” says Walsh. “There’s a good interest there now that the hurling is over, and it helps make the winter that bit shorter. We come from a very small place, quite rural, and Tullogher hasn’t a huge population or numbers underage. I’m not even sure how many we are picking from.

“Rosbercon would be more populated, but a lot of lads there would be playing soccer or rugby in New Ross; although Donnacha has always played with us.”

Walsh admits that the team is progressing all the time and that they are becoming more sophisticated with their game plan. "The Naomh Eanna win has given the place a good buzz and keeps us going. Winning a Leinster title would be a great achievement but, at the time same, a massive ask.”

Next up will be a home clash on November 24 with the winners of Dundalk Young Irelands and Annanough (Laois), who play this weekend.