"The one thing we didn't want to have was regret"

“It’s the greatest club story ever told,” screamed one commentator as David Gough blew the final whistle confirming Mullinalagtha’s win over Kilmacud Crokes in the AIB Leinster Club Senior Football Final. This may have been a surprise, but it was no miracle with the Longford side getting their game plan just right and holding their nerve when it mattered most. “I don’t know how to describe it,” said Manager Micky Graham. “At times I thought it was slipping away but you have to give credit to our players who just hung in there and took the one goal opportunity they got.”

One of the keys to the Longford side’s success was keeping Paul Mannion scoreless from play. Paddy Fox was the man given the task of marking one of the best forwards in the country, and such was his performance he was named man of the match. “It was a scary thought to be honest, but I knew I had lots of help around me,” says Fox of marking Mannion. “Any time I had any bother there was lots of lads around helping.”

Sitting in the stand in Bord Na Móna O’Connor park, one could not help but notice that the bulk of the 3,510 crowd were behind the Longford men. This was summed up by the wall of noise that greeted Mullinalagtha when they entered the pitch, a noise that was replicated anytime they did anything positive throughout the game. Fox says the crowd played a major role in their performance. “It was a massive help for us. Anytime we turned over a ball you could hear the roar,” said Fox, who thanked not just the local support but those from around Longford who came to Tullamore to support their fellow county men. The full back admitted that the support not only from Mullinalagtha Longford as a whole, counted for a lot in their build-up “I couldn’t tell you how many messages I got from people in rival clubs and that gave us a boost.” 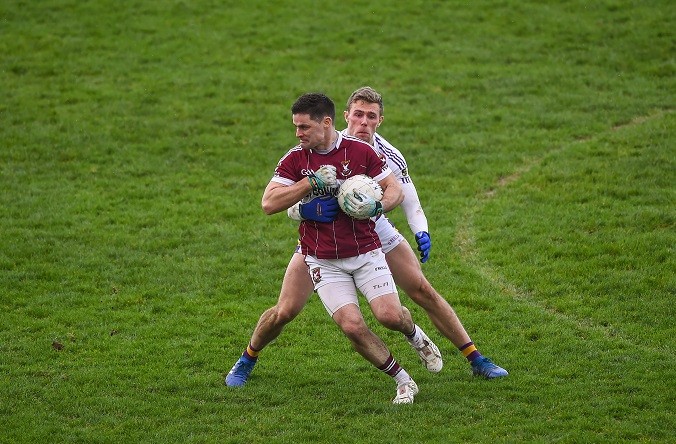 Much of the pre-game analysis involved comparing the club sizes rather than the actual teams to take to the pitch. Kilmacud Crokes may have contained recent All-Ireland winners Cian O’Sullivan and Paul Mannion but outside them and Pat Burke, Craig Dias and David Nestor, the team is quite young and, in comparison to their opposition yesterday, were inexperienced in the art of winter football. Eight of the Mullinalagtha side are regular county footballers and all have played provincial club championship football in the last three seasons. That difference told according to Crokes joint-manager Johnny Magee: “They’re a seasoned team. They’re three seasons in Leinster. You could see that in their play, it’s a hard lesson to learn but that’s football.” Magee was left lamenting some of the overplay by his team in the scoring zone but also a debatable black card for marauding corner back Liam Flatman. Another big loss was Dara Mullin through the hamstring injury he picked up in the semi-final win over Portlaoise, which was also keenly felt.

“Mullinalagtha won a serious amount of ball in the middle of the field and that gave them a serious platform,” observed AIB GAA ambassador and former Dublin All-Star Coman Goggins. “Throughout the field they had a hunger and desire to win a first Leinster title and that was reflected in the way they were picking up 60/40 and 70/30 balls. They were never out of the game and they had a never say die attitude that gave them the platform to go on and win the game and that’s what the difference was.”

Mullinalagtha haven’t just won for themselves or even the rest of Longford, they’ve won for all the little clubs out there who work for success. Next month when many club players return to training in the dark nights and wet fields of Ireland, they’ll go knowing that with the right attitude and good planning, they too can achieve greatness.

“This story challenges the perceptions around the modern game that you have to have big numbers and be a big club. They’ve shown that with the right attitude and the right manager you can achieve success,” says Goggins. 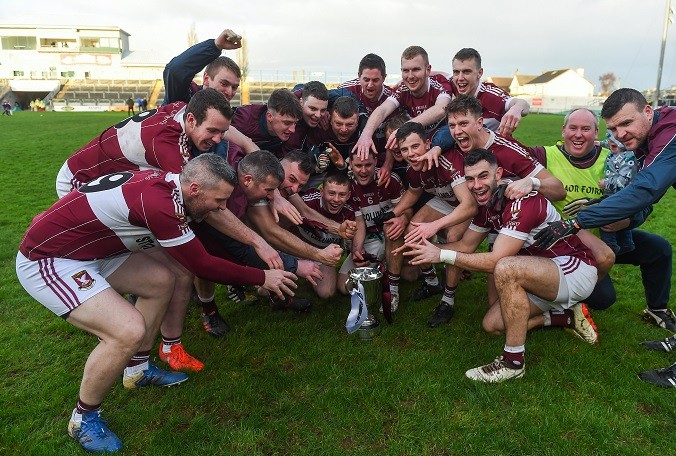 Young Ireland’s Aidan Sheekey obviously didn’t fancy extra time on Saturday’s AIB Leinster Club Junior Football Final. Deep in injury time with his team trailing by a point, he had the chance to draw the game level by tapping the ball over the bar but instead he sent into the top corner to turn a one-point deficit into a two-point lead. It caps off a great 2018 for Young Irelands who have bounced straight back up into the Intermediate grade following last year’s relegation.

All clubs have peaks and troughs but even before Saturday’s final, their chairperson Barry McDermott explained to LMFM radio just why their return to the Intermediate grade is so important. “Words can’t explain it” was Mc Dermott’s response when asked how important their return to Intermediate is. “When you’re going bad at the top it filters down into the youth, but they bounced back this year and everything seems to be hunky dory again.”

Young Irelands will hope that the Leinster Junior title can propel them to further success just like it had for Two Mile House. The Kildare outfit were provincial Junior winners in 2013 and this weekend continued their upward curve capturing the Intermediate title.

Chris Healy who was man of the match in their 2013 final stood out once again as they overcame Shamrocks of Offaly scoring three points in a 1-8 to 10 points victory in Bórd Na Mona O’Connor. Shamrocks comeback was not enough for them to sneak the victory against a club that have never lost a game of provincial football.

For this weekend’s three provincial winners, the next few days are the greatest they’ll ever experience. They haven’t just won a competition, they’ve filled their parish with a joy that only sport can bring. Celebrations are nothing without people and these teams have brought people together. Not everyone associated with these clubs are lucky enough to be at home for the celebrations but that doesn’t mean they can’t revel in their club’s success. Even before Sunday’s game Shannonside FM commentator John Duffy admitted he could not keep up with the amount of texts coming in from all over the world. “From Doha to Sydney from San Francisco, from Dallas and a good few from Manhattan as well, but it’s from Manhattan to Mullinalagtha for their first ever Leinster club final.”

In the lead into the game we were constantly told how small Mullinalagtha was, but over the weekend they showed what can be achieved when you have giant ambitions and a big appetite for success. Mullinalagtha have become more than just a team who have won a title. They are a symbol of hope and beacon for all of those who feel that small can’t mean successful.