“The bounce of the ball went against us.” It’s a common phrase used in sport, when a team loses a game by a tight margin. But in this case for Scotstown, it’s the lack of bounce they might be thinking about.

With the game all square and time running out, full forward Darren Hughes won a turnover in the centre of the park before slipping the ball to Ross McKenna who drove down the field through the swirling wind and rain - into the corner before slipping the ball back to Hughes. Hughes, knowing the route to goal was clogged on the right, saw Donal Morgan running into space on the left. What happened next may run through the mind of every Scotstown fan forevermore: “What if the ball had bounced into the stride of Morgan and not got stuck in the mud….”

Morgan may have received the ball but he may have been closed down, bottled up by the oncoming defenders or maybe he would have a struck a winning point. However, we’ll never know. No fault of either Morgan or Darren Hughes who made the pass, the ball just didn’t hop into Morgan’s path.

Gaoth Dobhair’s fortitude has been questioned in the past but any question marks over their resilience were answered in the last six minutes of extra time. The Donegal outfit went ahead for the first time since midway through the first half of injury time when Shane Ferry put them in front. Despite Scotstown’s best efforts, they could not find an equalising score.

The final whistle brought a release of emotion for Gaoth Dobhair who ended a long barren spell for Donegal clubs in the Ulster Club Championship, going all the way back to 1975. As man of the match Odhrán Mac Niallais was interviewed by TG4, the sound of his voice, combined with the look on his face and the joyous scenes around him, told even those who could not understand Irish exactly what this meant to him and his community.

“You’ve played on the biggest days for your county how does this feel compared to that?” asked Mícheal Ó Domhnaill. As Mac Niallais turned around and gave a loving glance to the celebrating crowd he said, “This is way better. You can’t beat this with your people, your own community, my family and the lads - you can’t beat it”.

Naomh Éanna made history on Saturday night, becoming the first Antrim side to win an Ulster Intermediate football title. Former Saffrons manager Frank Fitzsimons was the man leading his team to a 2-11 to 1-10 win over Cavan’s Mullahoran.

Kerry’s dominance of the Munster Junior Football Championship continued over the weekend with Beaufort beating Dromtariffe after extra time in-front of a crowd of 3,377 in Mallow. That’s the seventh time in eight seasons that a club from the Kingdom has collected the title.

Part of that 3,377 crowd in Mallow were also there for the Munster Junior Hurling final as Cork’s Cloughduv overcame Waterford’s Ballinameela by 0-17 to 0-11. Cloughduv ended a 48 year wait for a county junior title this season and have now added a coveted provincial crown. 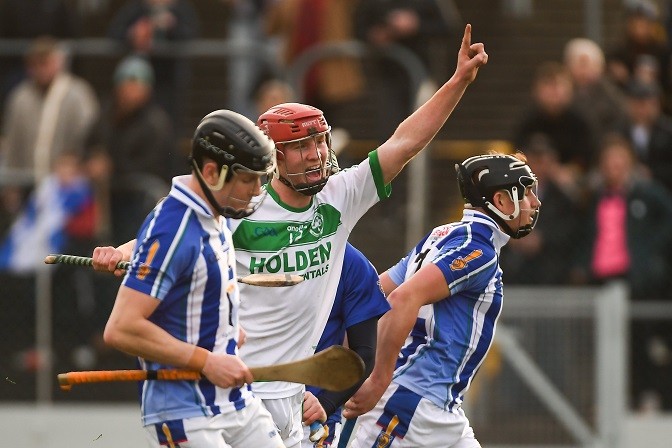 KiIlkenny completed a clean sweep of AIB Leinster Club titles over the weekend. Eddie Brennan scored 1-1 as Graigue Ballycallan overcame Portlaoise, 2-17 to 0-15 in Saturday’s Intermediate final. An injury time goal put the gloss on the scoreboard for the Cats. In the Junior decider, Dunamaggin proved too strong for Meath’s Na Fianna; 3-17 to 1-11.

Henry Shefflin is proving as prolific a manager as he was a player. Shefflin won 4 Leinster club titles with a jersey on his back and in his first year of management he has taken Ballyhale Shamrocks to provincial glory with a convincing 2-21 to 0-11 win over Ballyboden.

Adrian Mullen delivering on the promise he has shown with the Kilkenny minors, scoring a goal in either half for the now nine-time Leinster champions. Shamrocks led by 4 at the break but like so many Kilkenny sides of the past, they came out with ferocious intensity which their opponents just could not match. Mullen’s skill and touch, which was exemplified by his second goal, contained so much magic it suggests he could control the elements if he wanted to. He and his team must enjoy playing in the wind and the rain as they seemed happy and comfortable in such conditions. 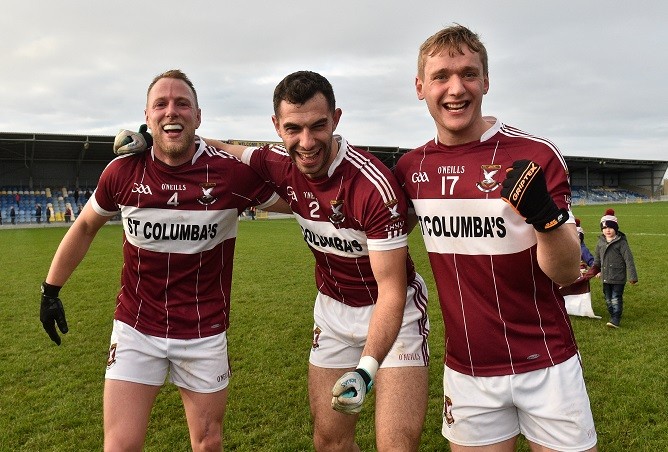 Back to football, and it’s been a busy few weeks in the Club Championship but hold off on the Christmas shopping for one more weekend! There’s three titles up for grabs this Saturday and Sunday. On Saturday in Drogheda, Dundalk Young Irelands face Offaly’s Saint Brigids in the Junior final. Brigids have watched their adjacent parish Rhode with envy over the last few years as they came close to winning a provincial title. However, they’ll hope they can go one further than their neighbours by winning Leinster this weekend.

The intermediate decider in Tullamore will star Kildare’s Two Mile House and Shamrocks in the Intermediate final. There’s a lot of quality on both teams with Peter Kelly and Chris Healy on the Kildare side and Offaly captain Nigel Dunne on the Shamrocks team - along with promising young forward Paddy Dunican. Dunican is concentrating on GAA at the moment having previously played as a goalkeeper with League of Ireland teams Athlone and Drogheda.

It’s not often you can compare Times Square and Two Mile House but both have been the centre of lost ring drama in recent weeks. Over the weekend a British couple went viral after losing a ring through a grate in the street. Up stepped the NYPD and after a social media campaign the ring was reunited with the newly engaged couple.

This was an original story for some, but not Two Mile House who’s on field county final victory celebrations were interrupted by something far more powerful than the NYPD - GAA stewards! They promptly launched a search for the missing engagement ring of one of the player’s mothers on the pitch in Newbridge. The search proved fruitless on the day, but the next day, with the assistance of a metal detector, the ring was found!

It’s been an interesting journey for Shamrocks keeper Brian Lowry. The Midland Tribune sports journalist has, for obvious reasons, absented himself from writing about his own team throughout what has been a wonderful season for them so far.

It’s the ultimate contrast this Sunday in Tullamore as 4-time Champions Kilmacud Crokes take on first time finalists Mullinalaghta. It’s not just a first final for Mullinalaghta - it’s a first ever final for any Longford club in a competition that has been dominated by Dublin in recent seasons.

Kilmacud Crokes have been good but not perfect in their run to the final, including scoreless periods against St Jude’s in the county final and again against Portlaoise in the provincial semi-final. If Mullinalaghta are to win they might find attack is the best form of defence.