Should Noel Hickey lead Dunnamaggin all the way to Croke Park, he’ll be bridging a gap of more than 2,300 days.

That’s because you need to go all the way back to September 30th 2012 for the full-back’s last appearance on the biggest stage of the game. It was on that day that Hickey won his ninth All-Ireland SHC medal with a win over Galway, in what was his final appearance for Kilkenny.

Now, his club Dunnamaggin are just 60 minutes away from the AIB All-Ireland JHC final in February, with Munster champions Cloughduv, who beat Ballinameela in their provincial decider, standing in their way.

The Marble County men last weekend beat Na Fianna of Meath in the AIB Leinster final, with Hickey delighted to play a part after a bad hamstring injury kept him out of the county final win over Piltown and a provincial clash with Louth’s Knockbridge, before he returned for the semi-final against St Maur’s of Dublin.

“I’ve been lucky enough to win a lot of things in my career and, as I said already after the Leinster final: whatever you’ve won most recently, you count as the best,” Hickey tells AIB GAA.

“Winning the junior county final was the best feeling we had in a long time, especially after we got relegated from intermediate, and things had not been going great in the club. So, it’s a huge boost to go on and win Leinster, particularly with so many young lads involved.”

“The county title was the aim, but you go into the province then and you want to win that too, and it’s a great achievement. I told the lads that in the dressing-room, and it’s just phenomenal.”

As a club, Dunnamaggin have had a rollercoaster quarter of a century. They won their first ever junior Kilkenny title in 1994, before going on to win intermediate in 1995. The breakneck speed of their progress continued, as they followed that up with a senior semi-final appearance against DJ Carey’s Young Ireland’s in 1996.

They kicked on again in 1997, this time making the final against Carey’s side, in what would prove to be Hickey’s senior championship debut. “I had played with the Dunnamaggin second team, which was the juniors, and I had played a few challenge games with the seniors,” says the three-time All-Star. “I was 16 years of age and the management told me I was starting on the morning of the final, making sure I didn’t have too much time to think about it. Because I was so young, I don’t think I fully appreciated it, but it was great to do it.”

“I was corner-back on Dick Carroll, and they had DJ out on the wing, and Charlie Carter at full-forward, with Pat O’Neill on the team as well. It was fantastic to win that game, and it was a period where we were winning minors and Under-21s as well. But we actually got relegated from senior as champions then in 1998, which was an absolute disaster, and unheard of for county champions.” 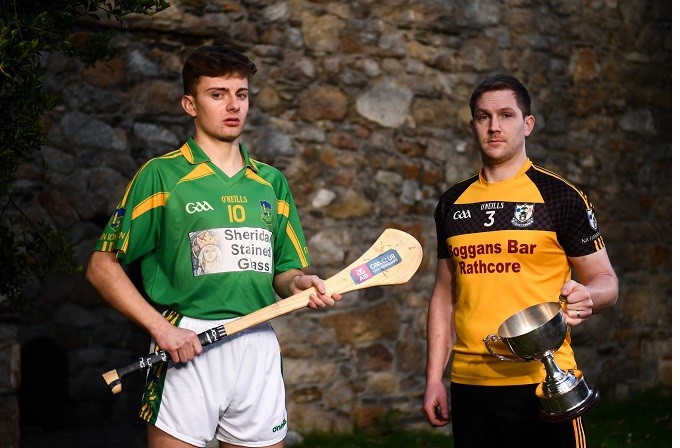 Dunnamaggin won intermediate again in 2000, with the yo-yo nature of their existence showing no sign of abating when they returned to the senior county final stage in 2002. Carey had been quiet in ‘97, but the dynamic forward gave Hickey a rough ride five years on.

The club remained competitive at senior for six or seven years, but then dropped a level in 2010 when Danesfort beat them, before slipping to junior in 2017 “which was a disaster, and we thought the club might not recover from it”.

Hickey now feels it might have been a blessing in disguise because a young crop has come in and tasted success right away, with a chance now to make it all the way to Croke Park. The county final win at Nowlan Park, which Hickey missed, was huge because it means intermediate hurling for 2019.

“We played Conahy Shamrocks in the (junior) quarter-final and, once we won that, we knew we had a good chance of going all the way,” says the farmer. “I was disappointed to miss the final, but I’ve hurled in a lot of games over the years and the main thing was ‘Maggin winning. As well as that, it meant an 18 or 19-year-old got a chance to play a big final at Nowlan Park that he otherwise wouldn’t have got. That helps bring lads on again.”

Next up is the clash with Cloughduv, and Hickey knows that the quality of the opposition is set to rise when the cream of Kilkenny meets Cork. “It would be great to win this game and get to Croke Park,” says Hickey. “It would be a great honour and achievement for us, and it would mean a lot of the people of the parish. Not just for the players, but for the mentors and everyone involved. I think Cloughduv will be a step up from what we faced in Leinster and I would expect their hurling to be sharper, being from Cork.

“I never thought I’d get back to Croke Park. My last time there was in the 2012 replay when I came on as a blood sub for JJ (Delaney) and then later when I came in for Kieran Joyce. I’d say I got the last 15 minutes of the game. I was delighted because I knew I wouldn’t be back as I was going to retire.”

“So, if we got back there, it would be fantastic.”