‘That ‘45 still crosses my mind most days’

It’s the moment she will never forget, the strike she can’t forgive and all owed to the nerves she couldn’t shake.

Rebecca Hennelly stood over a ‘45 during the dying embers of the 2013 AIB All-Ireland senior camogie club final with her Ardrahan side just a point behind reigning champions Milford.

Scores had been as rare as hen’s teeth throughout the game, and this was a chance to level it at six points apiece — to live to fight another day. There was added significance for Hennelly because she had missed the AIB All-Ireland intermediate club final two years earlier, having not quite recovered in time from her first cruciate knee injury.

“That ‘45 still crosses my mind most days,” Hennelly tells AIB GAA of her missed attempt to draw the 2013 final. “I never got over it and never will. I was low for a long time." We lost by a point and I had a chance to draw the game, and you never know what might have happened on the second day.

“I remember every second of it,” the Galway star adds. “I was just so nervous because it was the last puck of the game and I was so young; I think the whole occasion got to us. We had played at Croke Park two years before, but I was injured so it was my first time there. I was shaking when I stood over the free and it was sickening to watch it go wide.”

It would be easy to wallow in past defeats, but the 24-year-old is using the pain to drive forward once more. While she has had tough days, she’s achieved plenty too: she won a 2013 All-Ireland intermediate final with Galway, and an All Star as a senior in 2016. All of that despite tearing her right cruciate twice by the age of 20. She never felt 100% after the first injury, but then worked harder after the second tear and has “never pulled out of a tackle since”. As she says herself, it feels “ancient now”.

Hennelly was part of the Ardrahan set-up that won a county title in 2010 but that first knee injury kept her off the field for the entire championship run. She was on the sideline during the subsequent intermediate club All-Ireland final against Eoghan Rua, a game they lost 2-8 to 0-12, and watched on as goalkeeper Sara Skehill could only manage one point from two penalties in the final six minutes.

“I was only five or six months on from the injury,” says Hennelly. “I togged out, but I wasn’t right to play. I remember when we got the penalty near the end, the management turned around to me where I was on the bench, and I just said, ‘God no!’. 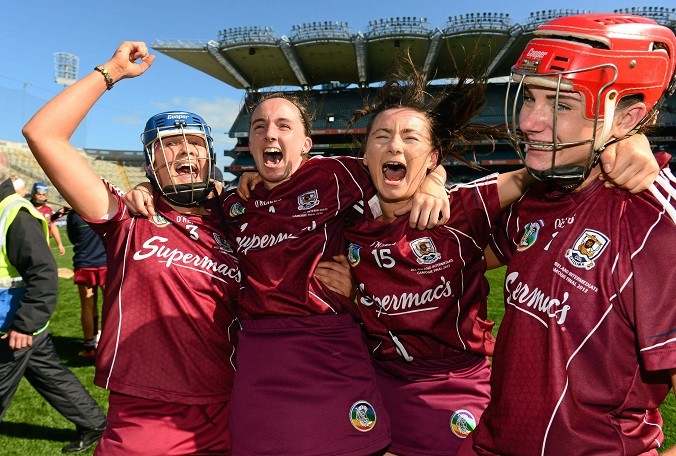 That loss is yet more fuel for the Ardrahan fire. It’s a parish of perhaps 1,500 people where “if you blink when you’re driving through, you’ll miss it,” says their star player. “There are two pubs, a post office, a hairdresser and the pitch. We have two big pitches and an astro pitch with a ball wall.

In an overall sense, Hennelly feels there is greater support of camogie across the country and, while she says they still have a lot of ground to make up on the men’s game, she acknowledges that increased coverage in the media is translating to bums on seats.

In Ardrahan, home of Iarla Tannian and Johnny Glynn, the women and men share the same facilities and generate the same excitement too. At the start of 2018, Hennelly never expected the camogie team to be the shining light on the area. They had won the county title six years earlier, but they had lost a number of key players, with some going travelling, and the team was pockmarked with young, inexperienced players. Manager Fintan McNamara, a Clare native, had taken over and he wasn’t settling for anything short of the best.

“Winning the county title this season was unbelievable,” says Hennelly, who scored one of the three goals in the final win over Sarsfields. “I never thought we’d win it at the start of the season because of the players that had left (the set-up). 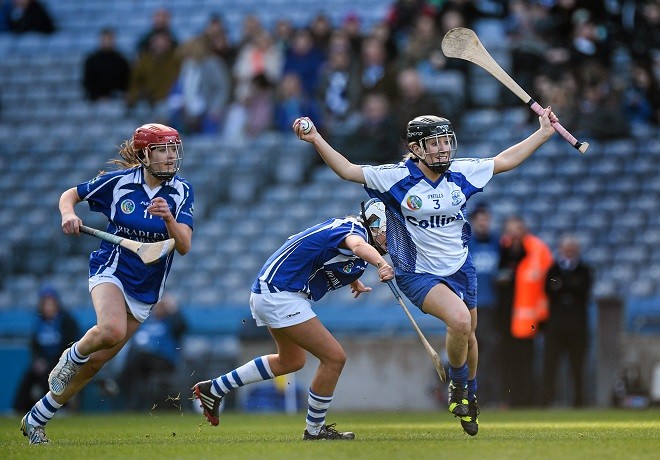 “I remember travelling to Galway training one day with Shauna Healy and Fintan sent this message with ‘#countychampions2018’ at the end of it. We just looked at each other and started laughing, but we were thinking ‘this lad is alright!’ It’s funny looking back on that now.”

That, of course, begs the question of whether their WhatsApp group messages now bear a fresh sign-off, perhaps ‘#All-Irelandchampions2019’.

Hennelly lets out a chuckle and says “maybe”. Of course, she’s well aware of the huge threat posed by Slaughtneil in the AIB All-Ireland semi-final. The Derry side are on course for a three-in-a-row of titles, having beaten Sarsfields in each of the past two finals.

“How do we stop them?” Hennelly wonders with a smile. “I haven’t seen them play and, after we won the county final, we took a few weeks off and enjoyed Christmas. We went back to training and we’ve just been focusing on ourselves since.

“It’s 100% my dream to get back to Croke Park and to put the past right,” she says. “We’re not looking past Slaughtneil but if we can perform, you never know. After 2011 and 2013, it would be unbelievable to get back there and put it right.”