Camogie finalists confirmed and history made!

“We have to believe we can win” JJ Doyle on St Martins All Ireland Final journey.

“We hadn’t done ourselves justice in the first half. At half time I said to the girls, if we could come off the field saying we’d given everything at least we could look each other in the eye, whether we won, lost or drew.”

Those were the words of St Martin’s manager JJ Doyle after his side reached their first ever AIB GAA Camogie Club final with a win of 11 points to 5 points over Inniscarra. The Wexford and Leinster Champions held a one-point lead after a stuttering first half and had to play against a stiff breeze in the second half. But as the old saying goes, ‘the wind doesn’t win you anything’ and that was certainly the case for Inniscarra in the second half.

If any of the St Martin’s faithful were looking for an early sign that it was to be their day, they got it in the eighth minute. As Inniscarra’s Niamh McCarthy bore down on goal, experienced full back Noeleen Lambert did what she had to do, dragging her down and giving away a penalty. Niamh Dilworth struck it passed Mags D’Arcy but standing firm on the line was Lambert who deflected the goal-bound shot, while the ball bounced back out to Dilworth, who popped it over for a point. One wonders what might have happened if the Cork side had received the psychological boost of an early goal.

Lambert and D’Arcy may have been the most experienced players on the pitch for St Martins, but it was the steady hands of Chloe Fox that guided them through to their first ever All-Ireland Final. Nine points came from placed balls, most of which were in the second half when her team faced a stiff breeze. It was more than enough to earn her the Player of the Match award.

To their credit, Inniscarra had no issue with the result. The Cork side’s manager Kevin Murphy told the AIB GAA live team “they were the better side, we have no complaints. I wish them well in the final.” Former Kilkenny player and AIB GAA analyst, Elaine Aylward was impressed with the work rate of the Wexford team.

“Inniscarra had dangerous players up front but Martins would not let them out of defence. They turned over Rena Buckley a few times. When you have someone of the calibre of Chloe Fox who can put over those frees against the wind, that makes all the difference.” 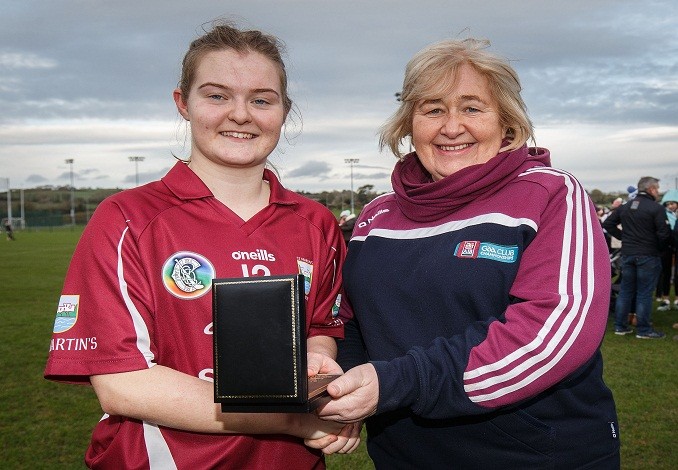 Waiting for St Martins in the final on March 3rd are two-in-a-row champions Slaughtneil. The Derry outfit have been the standard setters in the last few seasons, but JJ Doyle says his team can win. “We have to believe we can win otherwise we might as well stay at home.”

There’s not much more that can be written about how great a club Slaughtneil is. In tough conditions in their semi-final against Ardrahan at Ashbourne, they showed yet again their hunger for success has not diminished. Ardrahan manager Fintan McNamara admitted to Galway Bay FM that Slaughtneil were the better side.

“I’m extremely proud of the girls. They fought until the end but we just didn’t get that bit of luck. Slaughtneil are going for the three-in-a-row and they are worthy champions. They are a serious team.”

In the Intermediate Championship, Waterford side Gailtir booked their big day in Croke Park beating Offaly outfit St Rynagh’s in their semi-final at Leahy Park, Cashel. Two second half goals helped the Déise outfit to a 3-8 to 12 points victory. They’ll face Down’s Clonduff who overcame Galway’s Craughwell 1-8 to 9 points in Kinnegad. Sarah Louise Carr’s goal proved vital for the Ulster Champions to send them well on their way.