What if? That’s the question some clubs may be asking themselves over the next few weeks following a dramatic weekend of semi-finals in the AIB Junior and Intermediate Club Championships. For some there was joy, but for others, it was heartbreak and the hurt of missing a dream date in Croke Park. Two Mile House is one such club experiencing that hurt this week.

Kildare star and former All-Star Peter Kelly scored two points but was black carded early in the first half of the Intermediate Football Semi-Final defeat to Kerry’s Kilcummin. Losing an influential player so early in such a tight game may leave Two Mile House asking “what if” over the next few days.

Kilcummin lost a man through a red card early in the second half but managed to squeeze out the win, thanks to a late free from Philip Casey. It’s to Kilcummin’s credit that after the biggest win in the club’s history, they took time to console a Two Mile House player, who has strong connections to Kilcummin. Before the game, Caomhan Doolan spoke of his Kilcummin father and the time he spent in Kerry as a child. This family and football connection was not forgotten by Kilcummin’s social media team.

Antrim’s Naomh Eanna await Kilcummin in the final on Saturday, February 9th following their convincing win over Galway outfit An Spidéal in Navan. Three first half goals, including a David Beckham like lob from Joe Maskey sent the Belfast side on their way. That spectacular lobbed goal was created by a mistake from goalkeeper Magnus Breathnach. To his credit, Breathnach took to social media afterwards to own up to his error. However, the game was not decided by his error alone. Naomh Eanna showed power and pace that any team would have struggled to deal with on the day.

After a tough few seasons that included two successive relegations, Sligo side Easkey have bounced back and are now in an All-Ireland Junior Football Final. James Lindsay with the only goal, as they beat Red Hugh’s of Donegal in their semi-final. They’ll face Kerry side Beaufort in the final after they came from 4 points down to beat Dundalk Young Ireland’s.

“We don’t do things easy do we?” Were the words of Charleville selector Tony McAuliffe as he spoke to the AIB GAA live stream following their 1-15 to 1-13 victory over Graigue Ballycallan in the Intermediate All-Ireland Semi-Final in Thurles. The North Cork outfit are very much a reflection of their manager Ben O’Connor, mixing skill and hard running in their play. O’Connor’s younger brother, Kevin, created a goal with his driving run through the heart of the Kilkenny side’s defence. Despite picking up a knock during the game, Darragh Fitzgibbon continued to influence the match. The All-Star and Cork star is now a doubt for the final. Graigue Ballycallan were left ruing their wide tally of 13 but once again, Charleville proved their worth in a tight contest.

“We’ve had 9 Championship games this season and 8 out of that 9 were in the melting pot. We seem to be a better second half team. Our fitness is strong, and thanks be to God we got there,” said a relieved McAuliffe.

Charleville face Oranmore Maree in the final on Sunday, February 10th.  The Galway side were too good for Antrim’s Saint Galls, winning out 1-13 to 2-4 in Parnell Park. All-Ireland winner Niall Burke made a significant contribution to the scoring tally with 10 points from placed balls and one from play.

The Junior and Intermediate Club Championships don’t just give smaller teams a chance to win an All-Ireland title, it gives them the chance to make their dreams come true. Before the advent of these competitions, it might have been impossible for a Castleblayney hurler to grace headquarters.  That dream becomes a reality on Sunday, February 10th following their semi-final win over Carrick of Leitrim. It was a nervy finish to the game for Castleblayney who failed to score for the last 18 minutes of the match. 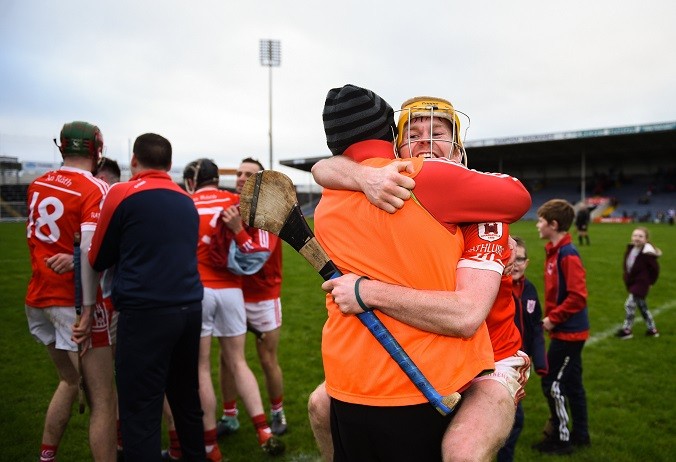 “To get to Croke Park, you’re going to put bodies on the line, and that is what we did today,” said Castleblayney Captain Peter Treanor to Northern Sound Radio afterwards.

They’ll meet Dunamaggin in the decider, following the Kilkenny outfit’s dramatic win over Cloughduv in Dungarvan, 0-23 to 2-16 the final score. Thomas Byrne scored 11 points from play, including two late in extra time, securing another All-Ireland Final appearance for Dunamaggin defender and former Kilkenny full back, Noel Hickey. The Kilkenny team will be the red-hot favourite for the final, but Castleblayney Captain Peter Treanor says, “when you dream of playing in Croke Park, you dream of winning. That’s what we’ll be aiming to do, we’re not just going to take part.”