“It’s not about being the first, it’s about winning”

“We probably feel we let it slip alright,” said a visibly distraught Castleblayney manager, Jimmy Lacey as he wiped away the tears outside a stony silent dressing room. “Everyone is telling us how much of a shock this would have been, but inside that dressing room it would have been no shock at all.”

The emotional hurt of Lacey, coupled with the haunting silence of the dressing room was striking as the Monaghan men reflected on what could have been, and almost was in Croke Park. As they approached the midpoint of the second half of the AIB All-Ireland Junior Hurling Final, the Ulster champions held a three-point lead, following a strong end to the first half and a bright start to second. This spell included a brilliantly worked Brian McGuigan goal and great scores by Fergal Rafter.

“No matter how many people we tried to tell we weren’t just here to make up the numbers, I don’t think anyone believed us,” said a defiant Lacey. “It’s hard to take, we felt the game was there for the taking but we let it slip. We probably lost our shape a bit in the second half and found scores hard to come by. I’m just so proud of the boys - they left everything out there and coming up we said have no regrets and I don’t think we have.”

The Kilkenny side’s experience told, and they avoided what would have been a huge shock against a Castleblayney outfit that could only be described as massive underdogs before the game. It’s rare a defeated team are the story of the weekend but given their performance against such odds we’ll make an exception for Castleblayney. Not that they’re in any way interested in moral victories or being admired for being a plucky underdog. It’ll take a long time for this wound to heal.

For Dunnamaggin, it was relief all round. “It’s an All-Ireland Final. It should be close, we’re delighted to get the win, and it wasn’t pretty at times,” said Dunnamaggin manager and former All-Star centre back Eamon Kennedy. “We don’t get too many All-Irelands as we’re a small club from South Kilkenny, so we’re delighted,” said Kennedy.

“It’s not about being the first, it’s about winning” - those were the words of Oranmore-Maree manager Gerry McInerney, following his side’s dramatic victory over Charleville in the AIB All-Ireland Intermediate Club Final on Sunday. Oranmore-Maree is the first ever Galway side to capture the title at this level, not that their manager was all that concerned about that statistic. Charleville led by 6 points at the break, however, they lost two men to red cards in the second half and couldn’t handle the dominance of Tribesmen stars Gearóid McInerney and Niall Burke. McInerney lorded the half back line while Burke was imperious, ending the match with a total of 1-11. Burke struck his second penalty with such venom, he managed to break his hurley, but still guided the sliotar into the net.

It’s something of a quirk of faith that Kilcummin enjoyed All-Ireland Final success on Saturday following a dramatic 5-13 to 2-9 win over Naomh Éanna of Antrim. It was Kilcummin native Seán Kelly who created the All-Ireland Junior and Intermediate Club Championship during his time as GAA President.

The score line suggests it was somewhat one sided, however, it was anything but. Experienced Kerry goalkeeper Brendan Kealy was forced into some dramatic saves when the game was still on the line. Kevin McCarthy was named man of the match after scoring 3-7 but Kealy’s saves rammed home the importance of a good keeper to any team.

The meaning of the victory to the squad and wider community is not lost on Kealy who told Radio Kerry, “It feels surreal when you’re looking down from the stand (during the trophy presentation) and you know all the faces looking back at you. There are friends there are family members there are people who’ve flown in and are flying back to America and different places in the morning. When you’re a player, your head is just down all the time, you’re looking to the next session and you’re kind of in a bubble. It’s only when the final whistle went, and I looked around, I realised how big a deal this is for people.” 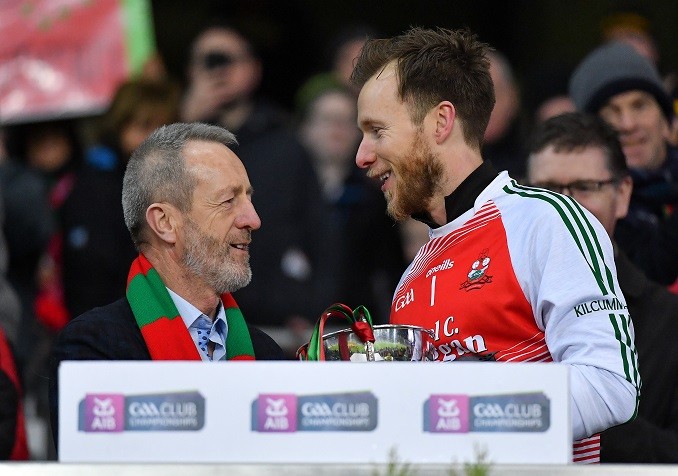 In the Junior final Sligo side Easkey couldn’t recover from a slow start against Beaufort. 3-17 to 5 points the final score of a game in which the Kingdom outfit had too much for the Connacht champions.

Beaufort and Kilcummin are so near to Killarney’s Dr Crokes club, their members may well be able to smell the bonfires and probably have been kept awake by the celebrations of their neighbours in the last few days. The joy and fun they’re are witnessing around them this week could serve as further motivation to get to the Senior Final on Saint Patrick’s Day, but they’ll face a stern test from Mullinalagatha of Longford in next Saturday’s semi final in Thurles.

Former All Star and AIB GAA ambassador, Coman Goggins has examined both games and thinks Dr Crokes’ talented forwards will see them through, but it won’t be easy. “Crokes have shaken the monkey off the back by winning an All-Ireland club title which allows them freedom to play. I think Crokes probably have the firepower to get them over the line.” 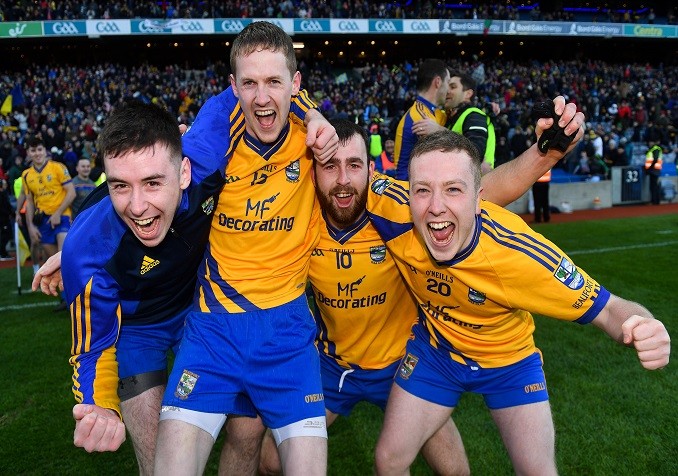 In the other semi-final defending champions Corofin take on Donegal’s Gaoth Dobhair in Carrick on Shannon. Reflecting on this encounter, Goggins pondered the big questions “have Gaoth Dobhair got enough guys for them to get scores throughout the game? Corofin have match winners all over the place. Kevin Cassidy on the edge of the square will cause a problem for Corofin and I think that game will be very tight.” When pressed on his predictions ahead of the weekend, Goggins opted for Corofin to get the better of Gaoth Dobhair and Dr Crokes to overcome Mullinalagatha.

The hurling finalists are already known after two tough battles over the weekend. There’s an old adage that great players don’t always make great managers. That adage doesn’t seem to apply to Ballyhale Shamrocks Henry Shefflin who in his first ever season in charge of his native club, has led to the All-Ireland Finals. 1-4 from Leaving Cert student Eoin Cody helped the Kilkenny and Leinster champions to 1-15 to 13 points victory against Ballygunner. They’ll face Saint Thomas’ of Galway in Croke park on Saint Patrick’s Day after the Kilchreest outfit overcame Ruairí Óg Cushendall by one point in Parnell Park, 18 points to 2-11 the final score. David Sherry’s late point the difference between the sides after an intense battle.