“I don’t know if it’s the hypothermia kicking in but I’m speechless,” said an overjoyed Slaughtneil joint Captain Siobhán Bradley as the snow blanketed Croke Park. Bradley was enjoying the aftermath of capturing their third AIB All-Ireland Camogie senior club title in a row. The Ulster side overcame Wexford’s St Martin’s 1-9 to 7 points in blustery, wet and snowy conditions. It might have been one of the coldest days of the year, but for Slaughtneil it was the warmest of feelings.

Slaughtneil didn’t look back after Tina Hannon’s early goal established a lead which they would never relinquish. Although St Martin’s worked hard and never gave up, they just didn’t have the guile or experience to overcome the champions. It might have been different had they converted a second half penalty but, alas for them, they’ll never know.

“I said it at the media day that it would be the stuff of dreams to do a three in a row and it really, really is,” said an overjoyed Bradley after the game, which was broadcasted on the AIB livestream. As the snowfall turned the pitch into a winter wonderland, Bradley praised her team’s focus both before and during the game. “We went into this game really focused and we didn’t let that focus slip. Our defence was solid and up front we did everything we could and broke through the lines. They had their breaks, but I think we were quite clinical, and I think the scoreboard says it all.”

Former All-Ireland winner with Oulart the Ballagh and Wexford Ursula Jacob, and former All-Ireland winner with Carrickshock and Kilkenny, Richie Power, were part of the AIB livestream analysis team and both were highly impressed by Slaughtneil. They lavished praise on the management who deployed a sweeper to real effect. Forward Tina Hannon gave a player of the match display for the second year in a row, with her contribution of 1-6 to the scoreboard.

“It’s a phenomenal achievement - they’re deserving winners, their motto is there’s no strength without unity and today that showed,” said Jacob.  Offaly camogie coach Richie Power predicted further success for the Derry women. “They have a game plan, they’ve stuck to it and it’s worked for the third year running. I wouldn’t be surprised if they were back next year and the year after.”

“They need to learn from today and I’m sure they will, it just wasn’t their day but l’m sure they’ll be back,” said Power of St Martin’s. Will they have regrets? “When you look at the last seven or eight minutes, Martins had a real cut off it. I would have loved to see them do it from the start of the second half, I just felt they were a bit reserved. If they had scored the penalty midway through the second half who knows what could have happened,” reflected Power.

Although the year came to a disappointing end, Ursula Jacob urges St Martins to reflect on the positives of this season winning a second county title in a row and a first ever provincial crown. “You learn more from when you lose a game and I am sure they’ll be back next year.” 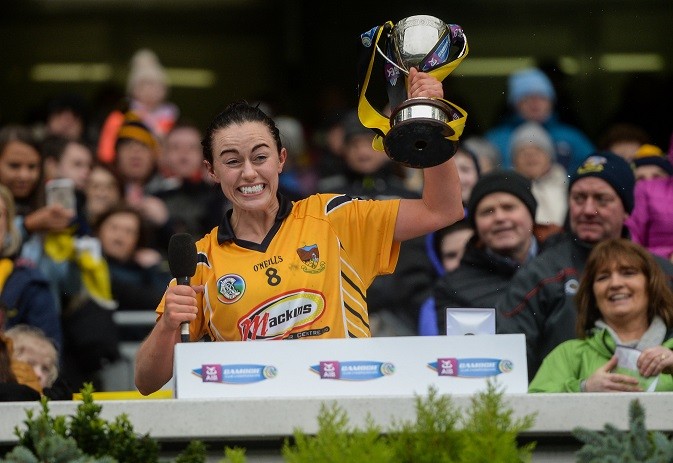 It was a great day for Ulster camogie in Croke Park with Clonduff of County Down winning the Intermediate Final by the narrowest of margins against Gailltír. Captain Paula Gribben gave an emotional speech outlining what it meant to her, the team and also the wider community of Clonduff. Ten of the panel were part of the Down team that lost to Cork in the Intermediate All-Ireland Final last September. The release of that pain was clear to see on their faces at the final whistle and the outpouring of joy that followed.

Ursula Jacob and Richie Power agreed that Clonduff’s leaders stood up when needed on the day. “Paula Gribben led from midfield all day, Fionnuala Carr had a massive game while Sarah Louise Carr got three big points. I’m delighted for her because she got sent off in the final last September, so she’s now exorcised the demons. It took Gailltír 14 minutes to score in the first half and again the second half, l’m sure they’ll regret that in the days to come,” said Power of the Waterford side.

“They’re young and they have lots of minors with just a few more experienced players. I think the next couple of weeks will be tough, but they’ll get themselves back together,” said Jacob of Gailltír. She added “they only lost by one point, so they can take many positives.”

The celebrations will continue for Clonduff and Slaughtneil for the next few days, but the memories will stay with them for life. History and legacy mean a lot to those in the world of Gaelic games and on days of glory it’s nice to take a moment to remember those on whom greatness was built. Former All Ireland winning footballer with Down Ross Carr took to social media after the game to do just that. 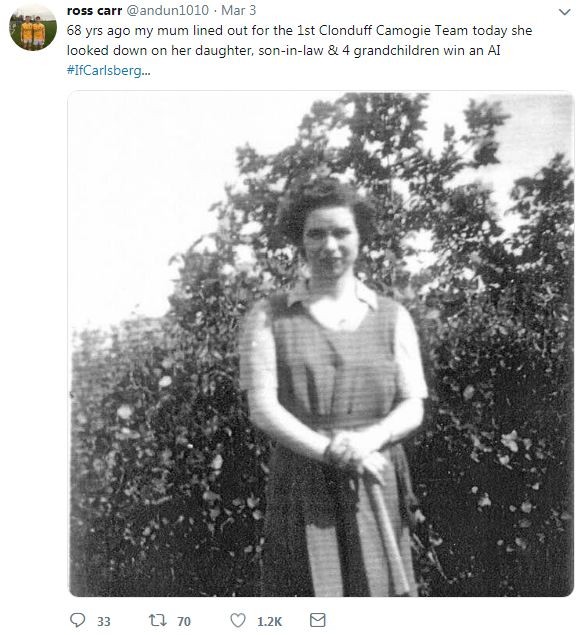