"There was this togetherness that I felt straight away.” - Shaun Patton

Declan Bonner had heard that Shaun Patton was a free agent.

Sligo Rovers hadn’t offered the goalkeeper a new contract at the end of the 2017 season, even though the youngster had played in the final four games of the season and helped them stay up. Patton had fractured his ankle in his last outing as a professional soccer player — a goalless draw with Drogheda United — and had time to ponder his future.

A couple of clubs approached the netminder, but it was Donegal manager Bonner’s offer that was most appealing. Patton hadn’t played Gaelic football since chasing the McLaren Cup in school, but his talent was clear, and in December 2017 he showed up for his first session with his county.

“Declan rang me when I was a free agent, so I came in for one of the trainings and I’d say it was in December,” Patton tells AIB GAA. “I showed up with a big cast, my foot in a boot, and there was this big huddle and they dragged me in.

“It’s like I had been there already, and it was something that I really enjoyed — they were all there for the one cause. There was this togetherness that I felt straight away.”

Sport is sport, but there were key differences in what Patton felt in GAA compared with the cutthroat world of professional sport. Not that he hadn’t enjoyed life in the latter, as he explains.

“During the season, you probably just have a single session and you finish at 12:30 each day.

“I enjoyed my free time,” he says with a smile, when asked how he filled the days. “There was always something to do: go for food, play a round of golf, go to the cinema. We had a fairly good, local crew at Sligo, so it was good. The spare time suited me. 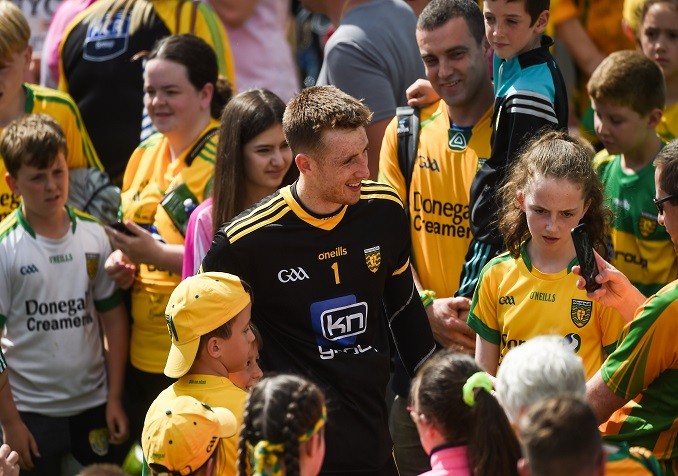 “It’s very different in the GAA where you have very little time. You’ve your 40-hour work week and then training after that. I spent about 18 months working in Michael Murphy Sports.”

As for the big decision to jump from League of Ireland to Gaelic football, there were crucial factors: “For one, I didn't feel I had been getting the game time I deserved, I got a good run near the end of the season with Sligo Rovers, but then I broke my ankle.

“I had to go for the x-ray and they never really looked after me until I was recovered. So that helped make up my decision when Declan rang me.

“I wouldn’t have known any of the Donegal boys well,” he adds. “I played a bit of underage soccer with Hugh McFadden at Finn Harps and that would have been it, I think.

“When you’re bouncing around the League of Ireland, Derry or Sligo, wherever you might be, you get to know people quite quickly. I think there’s more maturity in the GAA — the banter is there but everyone is mixing together, and there are no cliques. It didn’t take me long to fit in with Donegal, they made it easy.”

It was one thing embracing the training environment, but quite another to be thrown into the lion’s den against inter-county opposition. Gone were the days of relatively simple kickouts in soccer, to be replaced by the complex restart routines that so many Gaelic football games now hinge on.

“I had played Gaelic with my school in the McLaren Cup and we won it, and I even got an Ulster College All-Star,” Patton recalls. “There were a few years gap until we played Monaghan in the McKenna Cup at the start of 2018, and it was a baptism of fire!

“I think I had been back training for two weeks after my broken ankle, and I quickly learned the importance of kickouts. I also gave away two penalties, but neither of them was scored! I saved one and the other went wide, and I’m still claiming they were both harsh!” 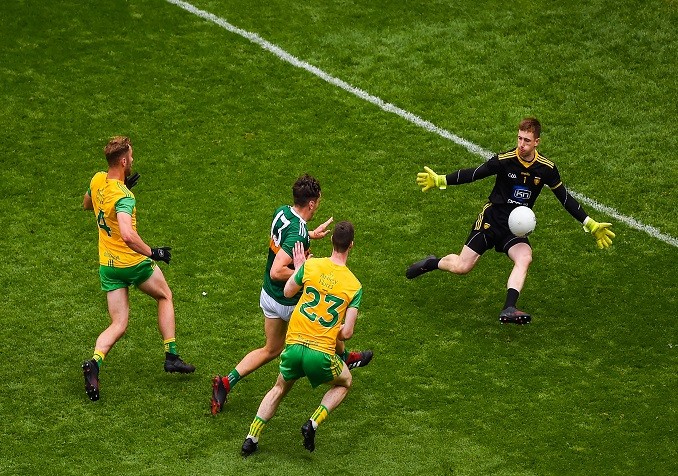 Patton wasn’t fazed by his first day in a Donegal shirt. Challenges were bound to come when changing codes and being involved for just two months with only a couple of weeks of training. A hiccup or two was expected.

He observes some key differences in the games. In soccer, the goalkeeper is often referred to as a ‘protected species’, and Patton explains that being the only person who can use their hands gives you a key advantage that is not there in Gaelic football. “In GAA, if a high ball comes in, you have to be ready and know that you could get contact— it’s a lot different.”

“It’s been something else,” he says of the journey so far. “We’ve had some days that aren’t supposed to come around too often. We won two Ulster titles and, whereas the likes of Michael Murphy and Paddy McGrath have a lot won, there was plenty of us winning silverware for the first time.

“Both Ulster wins are a sweet as each other, and that feeling on the final whistle is some feeling.

“I’ve thoroughly enjoyed the Super 8s,” he says, with Donegal beating Meath and then drawing with Kerry. “I’ve been playing games and I don’t get too much impact on the body, so it’s probably tougher on the rest of the lads.

“The reason you train is for occasions like playing Kerry at Croke Park, and it’s a privilege to be a part of it. This is the time of the year you want to be playing, and we’ve a lot of work ahead of us playing Mayo in Castlebar.”

Given the high-octane run Donegal are having just now, is there any temptation to return to the League of Ireland anytime soon?

“I was approached but it was nothing that interested me, and I’m really enjoying playing with Donegal,” says the 23-year-old. “Playing GAA is massive in the county and I always had an eye on it.

“I didn’t know what to expect from the likes of Murphy, Leo McLoone, Neil McGee, but they’re all normal fellas and they’re inspirational too. I have no plans on going anywhere, and I hope to play for another 16 or 17 years!”