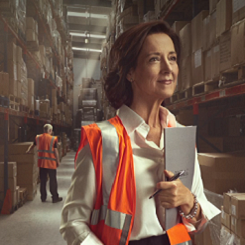 When it comes to being brave in business you won’t meet a better definition than Vicki O’Toole, Managing Director of JJ O’Toole Ltd.

The company has been around for over 100 years and employs a large workforce in Raheen, Co Limerick, supplying packaging to some of the UK and Ireland’s most well-known retailers.

Vicki’s journey with the business started in 2002 when the government introduced the plastic bag levy and the market for plastic packaging collapsed. Vicki knew quickly that things were about to change drastically for the company.

“I went food shopping on the first day the levy was introduced and could see that everyone was bringing their unbagged groceries out in trollies. We knew then that it was bad”. Their turnover slumped by 40% almost immediately, forcing the company to “adapt or die”.

The crisis prompted Vicki to join the family business where her husband Fergus was at the helm and began sourcing new suppliers for paper packaging.

When Fergus became ill Vicki increased her involvement in in the company and was named Managing Director when he retired in 2008. Learning as she went, Vicki worked tirelessly to revamp the family business and establish JJ O’Toole Ltd. as a significant supplier in the packaging market.

Through forward thinking and innovation Vicki expanded the company’s product range to offer extensive packaging solutions of both paper and plastic in the industrial, retail and food sectors, as well as an in-house graphic design service, free to all clients. In 2010 when Fergus sadly passed away Vicki made the choice to focus on building on the legacy of the company that her husband’s grandfather had founded and concentrated on winning new contracts. JJ O’Toole Ltd. is now Ireland’s leading supplier of packaging counting companies such as Selfridges, Newbridge Silverware, Avoca, Fenwick, Lloyds Pharmacies, Musgrave Group and Brown Thomas among their loyal customers.

Vicki’s impressive record speaks for itself and in 2018 the company posted sales of just under €9 million. Her hard work was recognised when she won Image Magazine’s Businesswoman of the Year 2011 and was shortlisted for the EY Entrepreneur of the Year award in 2018.

Having overcome so much in the last ten years through innovation and determination this year posed another huge challenge. Like many businesses around the country, Vicki and her team were badly impacted by the impact of the health pandemic. However, Vicki used this time as an opportunity to review many aspects of the business, including looking at new ways to generate revenue streams to make up for lost sales.

Before anything else was considered Vicki decided that JJ O’Toole Ltd. would use their extensive network for good. Because of their manufacturing relationships in China she was able to source PPE and donated free supplies of facemasks and gloves to the HSE and to charities that desperately needed equipment.

This action lead to more diversification and they started supplying protective equipment to pharmacies, opticians and others that needed it to operate in the changing landscape. This helped to make up the 77% of their regular sales that they had initially lost.

Vicki’s next big challenge was to consider how to change the way she did business with her retail customers. With bricks and mortar stores closed packaging needs were completely altered. A quick change was vital, and Vicki lead her team to grow the online sales aspect of the business, ensuring that the best eco-friendly packaging was being supplied to existing customers who had moved their business model to online orders.

The pandemic also allowed the team to have more time for strategic planning and they began to look at ways to increase their social media presence, improve their website and streamline operations. The move to digital meant that they were attracting new clients and reassuring existing ones that they were at the cutting edge of new trends. With customers foremost on Vicki’s mind, she also led the charge in improving the customer experience making sure that sales, finance and marketing were working together like never before.

Ultimately JJ O’Toole Ltd. is a family business where success is based on innovation, courage and determination and as Managing Director, Vicki is the driving force behind it all.

“Every day I work really, really hard to make sure nothing happens to the company. It’s not my blood but it’s the blood that’s pumping through my children’s veins.” This responsibility extends to her employees, many of whom are long-term, having worked with her husband and even her father-in-law. “I like that when colleagues walk in the door, they feel part of the family as we’re all going down the same road together.”

Back to Stories of Brave
Customer received a gratuity.

Please be aware that all of the views expressed in this Blog are purely the personal views of the authors and commentators (including those working for AIB as members of the AIB website team or in any other capacity) and are based on their personal experiences and knowledge at the time of writing.
Some of the links above bring you to external websites. Your use of an external website is subject to the terms of that site.
Allied Irish Banks, p.l.c. is regulated by the Central Bank of Ireland. Copyright Allied Irish Banks, p.l.c. 1995.
Connect with us now

Still looking for something?